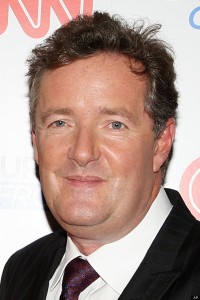 As the Whitehouse.gov petition to deport Piers Morgan approaches 100,000 signatures, the self-righteous prat has sought out a British outlet to defend himself and spew his hatred of all things American.

You will have to read the article for yourself to see just how out-of-touch Morgan is with American culture. But I will share a few of the more outrageous comments.

The first thing that caught my attention was his claim that the buying frenzy post-Connecticut has catapulted him past anger and into “blind rage.” He went on to call all those millions of gun owners (and TV viewers) “insane.”

Are you paying attention CNN? Isn’t the point of ratings to get MORE viewers? You probably have a pretty solid lock on the progressive demographic but is it really wise to have your star pupil out there insulting middle america?

In any case, the good news is that he ends his tirade with a promise that, if America doesn’t give in to his demands and strip ourselves of our rights, he will “seriously consider deporting” himself.

Your job America is to make sure that happens!

After all, Britain is probably missing an accused phone-hacker who has no scruples about running faked photographs …. Or maybe not.

Read more at The Daily Mail.