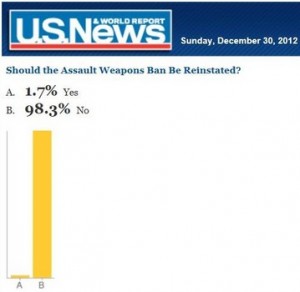 For the past several weeks Senator Dianne Feinstein (D – California) has been promising to release details on her bill to ban the sale of certain cosmetically offensive, but otherwise normally functioning, semi-automatic rifles. A semi-automatic firearm fires only one round per trigger pull (just like a revolver), unlike automatic firearms, also called machine guns, which fire continuously as long as the trigger is held down.

Feinstein says she is targeting something she calls “assault weapons.” Gun owners say she is targeting “modern sporting rifles” and have already fired a preemptive volley at Feinstein’s plan through a White House petition captioned “Stop any legislation that will ban ‘assault weapons,’ semi-automatic rifles, or handguns and high capacity magazines.”