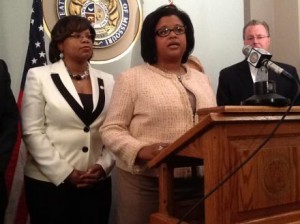 Missouri Democratic Senator Maria Chappelle-Nadal has introduced a bill in the Missouri Senate to require gun-owning parents to register the fact that they are gun owners with their children’s schools.

One can only imagine the negative consequences that children of gun owners will face when anti-gun school officials know they live in a pro-Second Amendment home.

This entry was posted in Abuse of Power, Gun Control, Missouri, Registration. Bookmark the permalink.