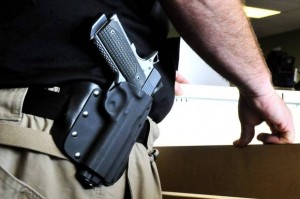 The Dallas Morning News has come out swinging against the idea of Texans being allowed to open carry.

Despite the fact that the proposal currently on the table by Texarkana Republican George Lavender would only allow open carry by those with a permit, they assert that it would be “provocative” and “intimidating.”

They need to hear from you. They need to know that it is an embarrassment to the vaunted spirit of Texan individualism that the citizens of such diverse cities as Philadelphia and Minneapolis can handle open carry but somehow the citizens of Dallas are not worthy.

Let the Dallas Morning News know what you think about that insult to Texas!

This entry was posted in Media Bias, Open Carry, Texas. Bookmark the permalink.