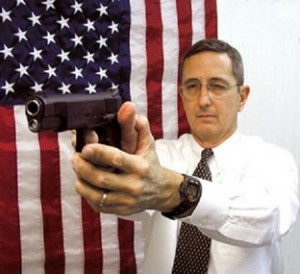 Jerry Patterson, current Land Commissioner of Texas and 2014 candidate for Lt. Governor, was in the Texas Senate in 1995 when he wrote and helped shepherd the Texas concealed carry law.

And now he is speaking out about open carry. As we reported yesterday, the Dallas Morning News has editorialized against Representative Lavender’s proposed open carry bill and Commissioner Patterson fired back.

In the comments section  of the editorial, he posted the following:

“I respectfully question why we should place much credence in what the DMN editorial board says today on this subject. In 1995 the DMN was among those daily newspapers that essentially predicted return of the wild wild west, blood in the streets, and shootouts at every 4 way stop if the CHL law passed, and as you now concede none of that happened. Dozens of states allow open carry by those without a CHL, and there’s no problem. Texas open carry would be only for those with a CHL! If it works elsewhere, won’t it work in Texas? Are we uniquely prone to violence or lawlessness? I think not. Open carry may not make things safer, but it wouldn’t make things less safe either. It would be reassuring to see a citizen with a handgun and therefore know that by definition they’re not a criminal and have had a recent background check!”

This entry was posted in Media Bias, Open Carry, Texas. Bookmark the permalink.