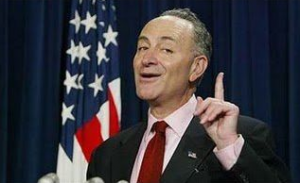 New York Senator and rabid anti-gunner Chuck Schumer today called on all major retailers to shut-down the Second Amendment by voluntarily stopping sales of semi-auto firearms until he and his cronies on the Democrat party can take legislative action.

Flat out lying to the press, Schumer makes it appear as if the sales occurring at major big-box retailers are totally unregulated.  “We have no idea how many people [buying these guns] are mentally ill, or how many are felons.”

That’s right … he wants the press and those who are unfamiliar with gun laws to believe that Walmart is going to sell a gun without the required background check which insures that felons and those who have been adjudicated mentally incapacitated are not allowed to buy a gun.

That leaves us with two possibilities.  1)  He is an idiot who has no right passing legislation that infringes upon the rights of law-abiding Americans, or 2) He is a conniving liar who is a traitor to everything this nation stands for.  I know which option I personally believe.

YOU need to call your local Walmart and let them know that your future dollars are contingent upon them NOT giving in on gun control!