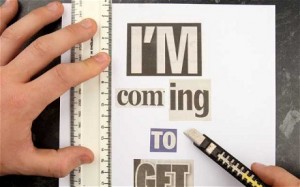 One of the most popular psychological theories concerning why anti-gunners are so afraid of inanimate objects revolves around the concept of transference. As the theory goes, anti-gunners simply cannot conceive of responsible gun ownership because they would not, could not, be responsible themselves.

This theory is bolstered by the sick and violent threats being made against gun owners over the last week.

WARNING: Violent and foul language ahead

Twitchy reported on a few of the early examples:

Sam Tarling @sammyswordfish tweets “All NRA members should be shot!!!! ”

John Cobarruvias @BayAreaHouston tweets “Can we now shoot the #NRA and everyone who defends them?”

Very Frustrated Pete @ArseBurgers tweets “Solution: Get every member of the NRA to stand in a circle, aim & shoot!”

Kate Rigg @katerigg tweets “the NRA should be shot.”

In Minnesota, where the unofficial state motto is “Minnesota Nice”, Christopher Burg who writes the blog A Geek With Guns received the following death threat.

How does it feel being responsible for the death of children? Shit stains like you are directly responsible for Sandy Hook! It’s time somebody put you gun fucks in your place. Your [sic] pretty fucking stupid putting your real name on your site. I live in Minnesota as well and I’m going to find you and fucking kill you. Your days are numbered asshole. Its [sic] open season on NRA shills!”

Given these examples of anti-gunner mental stability, I believe that Americans should be far more concerned about those in the Brady Campaign than those in the NRA.

This entry was posted in Death Threats, Hoplophobia. Bookmark the permalink.