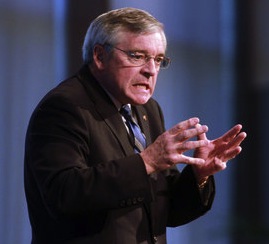 In a statement issued after the meeting, Mayor Heartwell admitted that the ordinance may be in violation of state law but he nonetheless fully intends to ignore the law.

“They may be correct. Whether they are correct or not, however, I have no interest in amending our ordinance nor have I heard interest on the part of my colleagues in doing so.”

He also called upon the country and the state to pass more gun control.

“I call on the citizens of Grand Rapids to join me in petitioning our state legislature to put in place rational gun control measures. I have heard from a number of citizens who want to join in forming a Coalition for Gun Control. I intend to offer the support and leadership of my office to launch such an effort in our city.”

THIS is the mindset of those who would strip you of your rights. They wish to pass laws encumbering you while ignoring laws themselves. If only they were capable of feeling shame.

This entry was posted in Abuse of Power, Michigan, Preemption. Bookmark the permalink.