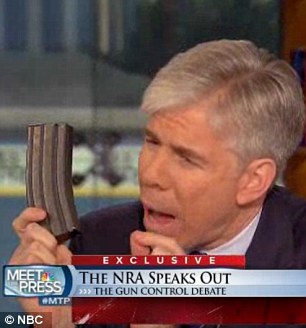 Last Sunday, in a Meet The Press interview with NRA Executive Vice-President Wayne LaPierre, NBC’s David Gregory repeatedly held up a 30 round magazine to illustrate his point that there should be a law against possessing such accessories.

The problem?  There IS a law in DC where the NBC studio is located. That law, like many of the draconian laws in DC that Gregory is a champion of, is very clear on what is prohibited:

The law makes no exception for self-righteous news commentators and Gregory cannot even claim ignorance of the law since his office reportedly contacted the DC Metropolitan Police Department prior to the show and were told that it was illegal in the District. Noted gun rights activist Ed Levine contacted the MPD and received the following response:

This entry was posted in Abuse of Power, District of Columbia, High Capacity Magazines, Media Bias. Bookmark the permalink.