Time Magazine: Should People Have Guns at Starbucks? 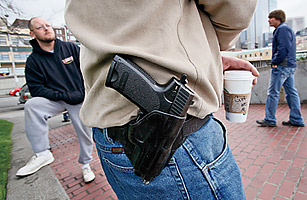 According to OpenCarry.org co-founder John Pierce, his group didn’t formally organize the Starbucks displays. Rather, he says, gun-rights advocates who use his site to plan meet-ups decided to highlight what they see as shortcomings in California’s gun laws. The state does have a rather strange–and among the 50 states, unique–law: you can carry a gun openly in California, but it can’t be loaded. Every other state that allows you to carry a gun openly also allows it to be a functioning weapon, one that actually has bullets.

This entry was posted in Open Carry, Winning The Culture War. Bookmark the permalink.