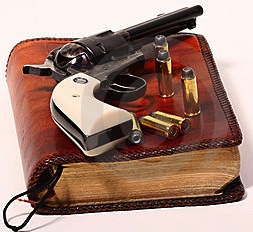 With the catchy intro “Salvation isn’t automatic — but it might be semiautomatic,” an article in The Daily notes that more and more churches are offering carry classes in an effort to reach out to hunters and shooters.

I really liked this quote from one of the preachers interviewed for the article.  “Jesus advised his disciples to sell their cloak and buy a sword … He instructed his people to be prepared to defend themselves.”

Noted Second Amendment advocate Dave Kopel sums up the trend nicely as “an example of the general cultural shift in the United States over the last two decades, in which people who support responsible gun ownership have become less timid about speaking up in public.”

This entry was posted in Carry in Church, Training, Winning The Culture War. Bookmark the permalink.